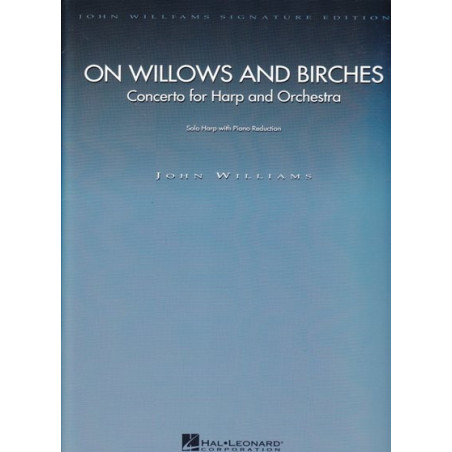 When Maestro james Levine asked me to write a piece celebrating the career
of our illustrious Boston Symphony harpist, Ann Hobson Pilot, I at first
demurred. Having written for the harp for a great many years in its role in the
orchestra, I was keenly aware of the difficulties in writing for this enchanting
instrument in a solo setting.

However, at the time of these discussions, while reading about trees I
happened perchance to come upon the opening of Psalm 137: "We hanged our
harps upon the willows." This vivid picture of the ancient Hebrews in
captivity in Babylon placing their harps in the trees forged an image that
stayed in my mind. Imagining the sounds that these harps might have made
as the wind traversed through the branches, caused me to put aside my
hesitation and agree to write the piece.

While searching for a companion piece for "Willows," I remembered Robert
Frost's famous poem about birches, in which the poet alludes to the
playfulness and elasticity of this beautiful tree. I tried to instill some of these
qualities in the music, hoping that they might combine to give the finale a
joyous character.

Over the centuries, paeans have been written describing the harp as a celestial
lyre and the instrument of the angels, and in the hands of Ann Hobson Pilot
it has always proven to be just that.

The concerto was given its premiere at Symphony Hall Boston on September
23,2009, with James Levine conducting and Ms. Pilot as soloist.