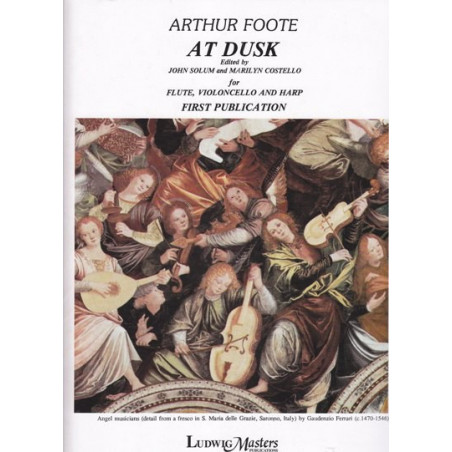 When Mozart's Concerto lor Flute and Horp appeared in 1778, it revealed an inherent musical charm in the blending of flute with harp. It must therefore be regarded as something of a historical curiosity that so few important solo or chamber works involving these two instruments have appeared in the ensuing two centuries. Among the few works which can be assuredly assigned to the "masterwork" category are Ravel's Introduction and Allegro (1906), Debussy's Sonatafor Flute, Viola and Harp (1916) and De Falla's Psyché (1927).
Thus it is with special pleasure that.we publish here for the first time,4l Dnsk for flute, cello and harp-a rare chamber music gem in the Romantic idiom by the noted American composer, Arthur Foote (1853-1e37).
Foote was the fîrst American-born'and American-trained serious composer to become internationally recognized. A graduate of Harvard, he devoted his life to musical composition, supplementing his income by teaching piano and by working as a church organist in Boston. For a number of years he taught piano at the New England Conservatory of Music in Boston, This edition carefully follows the autogaph score (dated November 28, 1920) which is found in the Haniet M, Spaulding Library of the New England Conservatory. The few minor deviations from the autograph serve primarily to correct obvious errors or to clarify ambiguously-notated phrase marks and slurs. Editorial additions are enclosed in parentheses.
I extend my gxatitude to the.Rev. Arthur Foote, heir and grandnephew of the composer, for his permission to publisli this work, to the staff of the Sipaulding Library of the New England Conservatory for their cooperation in providing a photocopy of thr: autograph score, aird to Marilyn Costello, principal harpist of the Philadelphia Orchestra, for fïngering and pedaling the harp part.